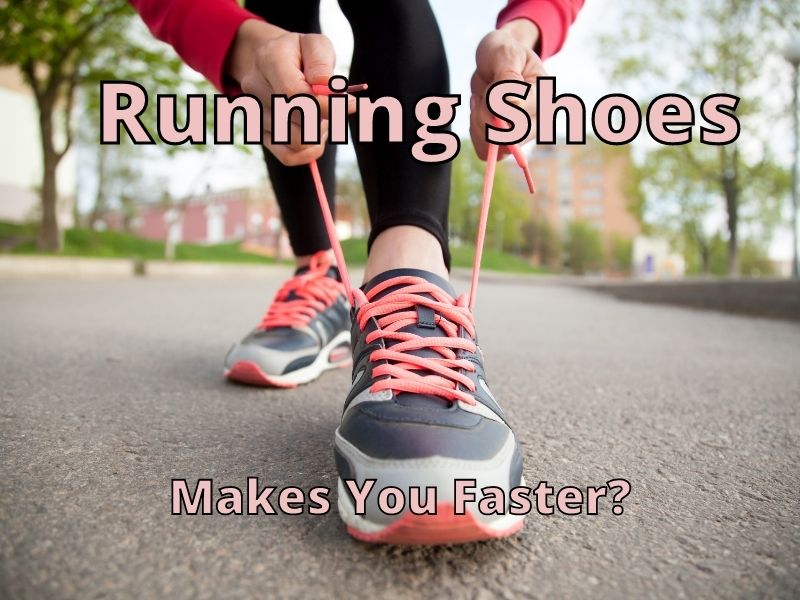 Recent findings back that running shoes can make you faster and improve the feet’ efficiency. This is because running shoes are built light and mimic foot movement allowing you to run faster and become more agile. Also, by reducing the mass of the shoes, your legs can swing efficiently.

Actually, there are some interesting findings regarding running shoes making you run faster. I think this topic is very useful to any runner or fitness enthusiast who wanted to find out why running shoes can make you faster. I’ll discuss some key reasons running shoes help with speed.

The Science Behind Running Shoes Which Makes You Faster

In the last two decades, there have been so many innovations in sports equipment and that includes running shoes according to a sports journal called springer.com. I think most prominent sports shoe brands are basing their shoe design on the new innovation and engineering of sports science.

However, this doesn’t mean that all running shoes can make you run faster. I believe there are some considerations for running shoes to become more effective in making you faster. These include the construction quality, the material used, and overall design.

I have listed below some of the factors how running shoes not only make you faster but also more efficient.

Running Shoes Make You Faster Because Of Lighter Weight

Among the main reasons why running shoes can make you faster is simply due to their reduced weight or light construction as I’ve mentioned earlier. With this kind of adjustment to the shoes, the feet can maximize their strength because of the reduced weight.

As a result, running shoes can make you faster because there’s no overbearing weight on your feet. Although there is more to it than being lightweight built. Not only that, with reduced weight, your feet can move and adjust freely improving their biomechanics.

The lighter weight is often considered by shoe brands as one of the key factors in designing a running shoe ensuring you can run faster when wearing it. Also, I think that most shoe companies want to have a shoe design that mimics barefoot running for more efficiency and preventing the risk of injuries.

Running Shoes Make You Faster Due To Cushioning

To make a running shoe more effective and efficient in terms of speed, I think that it’s not all about the weight. There’s also a need to have cushioning and support.

Runners of several marathons have shown that having the right shoe can make them run faster. Weight, design, and cushioning all work together to create what some call an unfair advantage, as seen in the video above.

I believe having a cushion in a running shoe has a substantial effect on the running shoes’ overall performance. This is because cushioning can provide support when you’re running on hard surfaces by lessening the impact from your joints which prevents the risk of having injuries.

However, too much cushion stuffed on running shoes can increase the chances of having injuries or foot pains. This is why I think most designers trim the cushion in the running shoes.

Running Shoes Make You Faster Due To Its Material

Typically, running shoes are made of Nylon mesh, polyurethane (PU), or Polyester breathable knit. These materials can easily form a smooth curve from the shoes’ last (it is used to form the shape of shoes – more about footwear lasts).

As a result, these materials can be stretched, lightweight, and your legs are able to swing well. Also, nylon mesh and other materials are ideal for running shoes because of the motion control given that the feet are more exaggerated while running.

These materials provide enough motion control allowing the feet to move without restriction for more blend and flex.

Running Shoes Make You Faster Because Of Overall Design

I believe one of the most crucial components of making running shoes has something to do with the design. I notice that the shoe industry, whether it’s sports, casual, or dress shoes, values its shoe design. Maybe not just because of giving a distinctive feature among its shoe competitors.

But also, because shoe designers tend to base on the foot’s movement as well as the shoe anatomy which can somehow affect the runner’s running performance while wearing their preferred running shoes.

Also, I think the evolution of running shoe design has become more and more efficient and there have been new innovations as well as recent changes. In fact, you can see some of them in the Men’s Journal article.

With the recent development and innovations coming up in the near future, I believe running shoes make people run more efficiently and faster which can encourage more people to run.

The Balance Of Running Shoes And Your Body Make You Faster

Running shoes alone can’t make you faster. However, if you know how your body works and select the right running shoes for you, I think this can have significance in your running performance.

In other words, finding the balance between the running shoes’ quality and your body might make you faster. I say this because every runner has its own running form, body type, feet type, and preferred type of shoes, and finding the balance is a matter of feeling and personality.

Also, I believe that the lighter weight of running shoes doesn’t completely make you faster and even one article says so (refer to Runner Click Pro). However, there’s a link between the weight of the shoe and running performance. But sometimes it sorts of a complicated answer.

With all said and done, I have a question in which I’m going to try and find out the answer below: what makes running shoes the appropriate shoe?

Choosing The Right Running Shoes For You

There are various types of running shoes and there are also different surfaces to consider when choosing a running shoe. Depending on where you run, this affects the running shoes you wear and your running performance which is key to making you faster.

This section is my attempt in answering my previous question above. This is why I have listed below the few factors to consider in choosing a running shoe.

Select A Specific Type Of Running Shoes — Running shoes is just an umbrella term. Actually, there are certain kinds of running shoes such as road running shoes, trail running and etc. Each of these running shoes has different functions, specialized technology, and specific design features. Determining your running shoe type can affect your speed and running performance.

Running Shoes Should Be Comfort Fit — This actually rings true to every shoe as well. However, I think in running, comfort fit should be a priority. Because the running shoe doesn’t fit right, instead of making you faster, it causes you to become slower and even gives your foot injury.

Running Shoes Should Be Reasonably Priced — I always believe that the more expensive the shoes the more it’s going to last longer and are more durable compared to less expensive shoes. However, it’s not entirely true.

Because usually, good quality running shoes have a price range from $100 to $250. With this price range, I can find a nice pair of shoes that will last over time with added proper maintenance.

Test The Running Shoes When Buying — The running shoes you preferred will not make you faster if you haven’t actually tested them. Trying the shoes before buying is important. Because this will determine if the shoe is right for you. You get to experience the feel of the running shoes while trying them out by walking or running.

I think just running shoes is just another tool to make you run faster and more efficiently. The key to running faster is not in the running shoes themselves but also in your body. After all, every runner wants to improve their running ability and gain speed including myself.

With the information I gave to you about running shoes and some of my general running tips, I believe these might help if you are aiming to run faster and improve your performance. Here are my general tips for running faster:

Having A Healthy Diet Can Make You Faster — What you eat will play a huge factor in your overall running performance more particularly the foods you eat before your workout runs.

I normally eat a banana or half cup of muesli before I go running. While taking short breaks from running, I only consume granola bars or sports drinks. After running, I only eat low-calorie foods such as chicken together with vegetables.

Staying In Good Shape Increases Your Running Ability — Having a healthy diet and staying in shape go hand in hand in gaining speed and running more efficiently. Your body weight plays a significant role in your running performance.

Increasing Your Mileage Can Make You Faster — By slowly increasing your running distance and pushing yourself a bit (but not overworking it) can affect your running performance. By the time you are doing it consistently, your body may feel some changes and you notice you’re wanting to run a few more distances and gain some speed.

Also, increasing your mileage is an effective workout if you are going for a marathon.

Basic Warm-Ups Can Make You Faster — Doing some warm-ups even if it’s basic is an important aspect in having a better running performance. Even basic stretching will boost your running activity.

By warming up, you are letting your muscle, bones, and joints loosen up which conditions your body and feet to avoid any cramps and potential injuries when running.

Improving Core Strength Can Make You Faster — Having a developed core plays a major role in running faster. Because the core helps you stabilize your spine when running. This makes sure you have maintained a proper form which is important in running.

Also, having a developed core improves your endurance and agility. The stronger your core the better the more effective your feet will become and the faster you can run.

I believe that it’s possible to link running shoes in making me faster, however, I don’t support it entirely. Because there are also some factors to consider. Among them is the person’s body as well as the certain surface you’re going to run.

I’m glad that there are continued development and changes based on sports science and engineering when it comes to running shoes. I think that in the near future, running shoes can make our running performance more efficient and there will be less injury due to better design and construction quality.

How about you, do believe that running shoes make you faster?

Eyr is a content writer, outdoor enthusiast, and shoe collector, who loves to craft his own adventures be it by reading books or going on outdoor trips. At home, he enjoys reading, watching classic films, and sometimes playing with his adorable feline.

link to How To Lace Shoes, So They Become Slip-On Shoes?

Slip-on shoes are perfect for someone like me who runs away from the hassle of tying and untying shoes. Unfortunately, shoes come with a traditional lacing style and are not slip-on. Luckily, we can...

(For informational purposes only. Not medical advice) Keeping a dog can be tricky at times. You need to be aware of anything that could be hazardous for them. Sometimes alarming situations come up,...

This site is owned and operated by LIW LLC, a limited liability company headquartered in California, USA. LIW LLC is a participant in the Amazon Services LLC Associates Program, an affiliate advertising program designed to provide a means for sites to earn advertising fees by advertising and linking to Amazon.com.